Throughout Exodus, nature makes an astonishing impression upon the reader. An unburnable bush leads to plagues of flies, disease, locusts, and hail. A massive wind parts the sea. But what caught my attention were the pillars of fire and of cloud that the Israelites followed from Egypt. What were these pillars that Moses and his people used as guidance out of slavery?

Cloud by day, fire by night.

As I thought about this force of nature that could guide people by smoky clouds in the day, and fire burning up the night sky to lead the way, another thought popped into my mind. The pillars were always before the Israelites, which could be construed as in front of the Israelites. They could be literally walking towards a pillar of cloud or of smoke, which could be stationary, not whirling through the desert like some supernatural force. The pillars could be natural! In that case, what could cause a natural, stationary column of smoke or fire? In my mind, I could only think of volcanoes.

In chapter nineteen of Exodus, the people of Israel are led to Mount Sinai:

“On the morning of the third day there were thunders and lightnings and a thick cloud on the mountain and a very loud trumpet blast, so that all the people in the camp trembled…Now Mount Sinai was wrapped in smoke because the LORD had descended on it in fire. The smoke of it went up like the smoke of a kiln, and the mountain trembled greatly. And as the sound of the trumpet grew louder and louder, Moses spoke, and God answered him in thunder.” (Exodus 19:16-19)

What has thick smoky clouds, on fire, and a loud blast that scares the hell out of everyone in its immediate vicinity? That most definitely sounds like a volcano. The mountain then trembles greatly—is this the rumbling of an active volcano? Exodus seems to be pointing out that Moses and his people were at the base of a volcano, making camp. 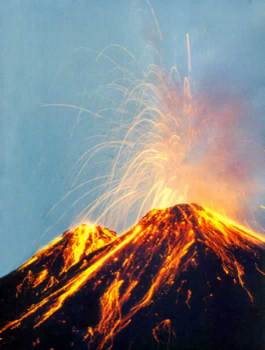 Doesn’t this look like a peaceful place to pitch your tent and relax from traveling for so long and so far from slavery?

In my research, I discovered a few theories as to the placement of where Mount Sinai truly lies. Some claim the mountain is in Saudi Arabia (Scientist Defends Book of Exodus) while others lay out a series of arguments against that placement based on biblical quotes (Problems with Mt. Sinai in Saudi Arabia). However, no scholar seems to argue over the volcanic explanation. In further research, there are many active volcanoes in the west and northwest regions of Saudi Arabia (Volcanoes of Saudi Arabia). These volcanoes are along an ancient lava field that has recently reactivated (Christian Science Monitor). Around ten million years old, these volcanoes definitely could have been active during the time of Moses and his people fleeing Egypt. In conclusion, if scholars ever came to the agreement of the true location of Mt. Sinai, then a case could most definitely be made for the plausibility of a volcanic explanation to the traditional Exodus story.