What is the significance of Ezekiel’s hairy ways?

As I have read through the Old Testament, I have had a tendency to notice verses relating to hair. This week’s hirsute verse comes from Ezekiel 5:1-6:

“And you, O son of man, take a sharp sword. Use it as a barber’s razor and pass it over your head and your beard. Then take balances for weighing and divide the hair. A third part you shall burn in the fire in the midst of the city, when the days of the siege are completed. And a third part you shall take and strike with the sword after them. And you shall take from these a small number and bind them in the skirts of your robe. And of these again you shall take some and cast them into the midst of the fire and burn them in the fire. From there a fire will come out into all the house of Israel.”

I wished to know the significance of Ezekiel cutting his hair and beard. What was the meaning of the parting the hair into thirds, and using them in symbolic rituals? Do these rituals have any significance for the Israelites? Is there a significance to thirds or the number three in Judaism? 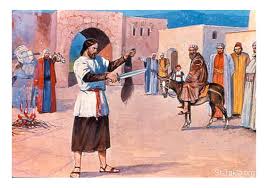 Ezekiel divvying up his hair.

Ezekiel was a priest, and instructed as such, he followed Levitical laws absolutely, especially in terms of hygiene. One of these laws governs the way a priest trims his hair and beard. Shaving his head and face likens Ezekiel to a pagan priest, making his bald status humiliating and degrading (Bible Study Tools). Ezekiel’s hair signifies the people of Israel, and by removing it, symbolizes the Protagonist’s utter desertion of His people (Sacred Texts). Using a sword lends a violent tint to the action, reminding the Israelites that the Protagonist’s judgement is to be violent and sharp as a sword. It also reminds the people that this weapon is capable of execution; as a people, the Israelites feared eradication by other nations, and Ezekiel’s removal of hair with a sword only drove this point home most compellingly.

The next step Ezekiel takes with his depilatory results is to split the hairs into three distinct piles for there separate and symbolic rituals. The number three has significance in Judaism, particularly in the study of numbers or gematria. Gematria has  specific correlations from Hebrew lettering to numbers. The number three, in particular, symbolizes gimel; this word is derived from the Hebrew gemul, meaning “justified payment” or “giving reward as well as punishment”. In addition, this symbolizes the constant progression of the Jewish person (The Hebrew Letters). Ezekiel’s three piles of hair symbolize the rightful punishment of the Israelites by the Protagonist. In addition, the punishment of the Israelites forces them back to the path of the Protagonist, a progression forward from their idolatrous ways. The actions done with the hair is what will happen to the Israelites. This idea is perpetuated in further along in Ezekiel 5:12:

“A third part of you shall die of pestilence and be consumed with famine in your midst; a third part shall fall by the swords all around you; and a third part I will scatter to all the winds and will unsheathe the sword after them.”

This verse confirms the actions that Ezekiel takes with his hair. He first burns a pile in the middle of the city of Jerusalem, to show that it has been consumed by famine and pestilence during the siege. The second portion was to be struck with a sword; more literally, the Israelites were to die from warfare.The third remaining part was to be scattered on the wind. This literally meant that the Israelites were to disperse throughout the lands. They were to be constantly chased by the sword or violence, and the Israelites would live out their days in captivity. A small select bit of hair was to be plucked and kept from this pile, safely stored in the skirts of Ezekiel’s robe. This little dusting of hair represents the Jews that are to survive the Protagonist’s punishment (Ezekiel Commentary). This message of destruction bringing redemption is yet another example of the continuity of the message of Deuteronimistic history.

As I have learned from my research, Ezekiel’s bizarre actions concerning a pantomime of burnt, cut, and discarded hair truly relate to the divine punishment doled out by the Protagonist. Such simple imagery portrayed Ezekiel’s prophecy for the Israelites clearly enough to allow a small group (the saved hairs) to survive the divine judgement that was the continuation of Deuteronomistic history.