Lucy, Daughter of the Devil as a New Testament Allusion

For this week’s blog, I chose to do an allusion pertaining to a certain story of temptation that transpires in the books Matthew, Mark, and Luke. After his baptism, Jesus wanders the desert of Judea in a strict fast for fourty days and nights. The devil pops up to tempt the meandering messiah. Mark is very short and to the point, merely stating that Jesus was “sent…out into the wilderness…being tempted by Satan” (Bible Gateway). The other two books provide a more detailed tale of Satan’s coaxing Jesus into damnation, listing each temptation.

Original Logo of Lucy, Daughter of the Devil

This story jogged my memory; a most hilarious show surfaced from deep within my mental phylacteries. The show I recalled was a computer-generated cartoon from Adult Swim that officially ran in 2007 (The Culture Shock). Created by Loren Bouchard, Lucy, Daughter of the Devil featured the devil as he tries to enlist the help of his daughter Lucy, most obviously the Antichrist, as he attempts a myriad of schemes to take over the world and kill off his opposition, Jesus. Each character is an exaggeration of stereotypical societal expectations. For example, Satan is bright red, with long pointed horns, and a perpetual, mischievous jokester. Lucy, who is avoiding her pre-determined fate as the Antichrist, is an aimless art school graduate with teensy little horns. She begins dating a local DJ named Jesus. Yes, I did just say that Jesus (pronounced hey-zeus), is a disc jockey. The comedy doesn’t stop with this trio, however. Other biblical and traditional Christian references run amok throughout the show, such as Judas, the DJ’s assistant, and three members of the Catholic clergy on a mission to kill the Antichrist.

The show’s fourth episode focuses particularly on the temptation of Christ. Brought to a modern setting of Burning Man (the famous week long event of art and community expression), Satan attempts to tempt DJ Jesus as he travels to the festival. Unbeknownst to the participants of the festival, a major prophecy is in play— if the DJ doesn’t arrive on time, a supernatural massacre will happen at Burning Man. Satan uses this prophecy to his advantage, and decides to tempt the DJ to make him late. He causes the unsuspecting Jesus’ car to crash along his way to Burning Man. The first biblical reference in this episode is a quote from Satan as he explains to his secretary, Becky the Devil’s Advocate, why he chose this particular plan: “Beck, everything doesn’t have to be about temptation, but sometimes it’s hard to resist.” 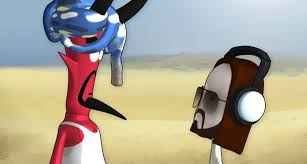 The show doesn’t waste time belabouring the point. Five seconds after the credits, DJ Jesus explains that he has been walking for a long time in the desert, confirming that this episode is about the biblical story of the temptation of Christ. The next reference is immediate as Jesus replies to Satan’s questioning that he is indeed hungry: “I haven’t had food or water in fourty minutes”; this is a direct nod to the fourty days denoted in Matthew, Mark, and Luke. In the Bible, upon noticing how hungry the wanderer was, Satan suggests that Jesus turn stones to bread. In Lucy, Satan offers Jesus some food as well— in the form of either teriyaki chicken or mangoes from beautiful women at a food court mirage. In both stories, Jesus rejects Satan’s offer.

The next scriptural connection is based more in Matthew, but may also connect to Luke’s description. These authors state that Satan led Jesus to “a very high mountain” or “a high place” and offered him many kingdoms and the “splendours” of the world. Jesus again turns the devil down. In Lucy, Satan attempts a similar plot. The “splendours” of the world is spun into a disc jockey’s dream; Satan tries to convince Jesus that he should take the offer of home electronics, as shiny big-screen televisions with extended warranties and surround system glisten into existence in the middle of a sandstorm. DJ Jesus again backs away from this temptation, denying the devil once again. Satan tries once more to cause the DJ to misstep in his mission of spreading love. He takes DJ Jesus to a brothel, Temptasia, which is upon a “small mountain slash hill” that can only be reached via an incline train. On the ride, Jesus tells Satan that they have differing opinions, and that is the end of things. This statement reinforces the biblical idea of rejection of temptation. The final allusion of the temptation of Christ is when Becky the Devil’s Advocate holds out the deed to Temptasia Mountain at the behest of the devil. This allusion is the very detail of Matthew and Luke in which Jesus turns down Satan on his offer of the world’s kingdoms.

Finally, after the DJ rejects the final offers of Satan, he tells the devil to “get behind him”, another Christian joke. The scene wraps up with DJ Jesus mentioning that if Satan really wanted to party, he should go to Burning Man, which is “like Sodom and Gomorrah”. Ironically tempted by this offer, Satan drives Jesus to the festival to relieve Judas from DJ-ing duties and to keep the deadly prophecy from being fulfilled. Manna rains down from the heavens above as DJ Jesus takes possession of the booth.

In conclusion, one cannot help but notice the funny connections that span from Lucy, Daughter of the Devil to the Bible. Each episode is eleven humourous minutes of biblical and Christian traditionalism in the form of well-written witticism.