Levitical Extremism in “The Girl with the Dragon Tattoo” 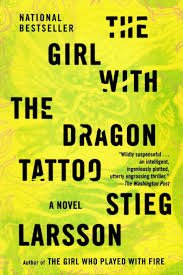 cover of the book

For our allusion this week, I chose to cover the first book of the Millennium Series by Stieg Larsson, “The Girl with the Dragon Tattoo”. Known especially for its dark, feisty heroine, Lisbeth Salander, the book takes place in Sweden in the early 2000s. The plot focuses around Lisbeth and Mikael Blomkvist, an investigative journalist who had recently been convicted of libel, as they investigate the 35 year old disappearance of a young girl from a prominent family, the Vangers. Her uncle believes that she has been murdered by a member of the Vanger family because she disappeared during a family party. However, the deeper the detective duo digs, they discover a darker secret connected to the Vanger family—a string of brutally gruesome murders.

from the Swedish film on the right: Who is the better Lisbeth?)

Though Sweden was officially neutral during World War II, the Vanger family was connected to the Nazi party, and its anti-Semitic ideas leached into the younger generation, including Harriet’s father, Gottfried, and her brother, Martin. In addition, the Vanger family owns one of the wealthiest corporations in the country, for which both Gottfried and Martin travel to work. Gottfried sexually abused both of his children, introducing Martin to a taste for violence towards women. Both men then started to murder together, but in a most peculiar fashion. Every girl was brutally killed according to a verse found in the book Leviticus; in addition, every girl had a name of Jewish origin. Lisbeth and Mikael had found this information within Harriet’s journal, listing the names along with numbers. At first thought to be phone numbers, and next dates, the two struggled to put together what the possible significance of the list could be to Harriet. The information they worked with looked as such:

How were these two sleuths supposed to decipher such a code from the depressed, twisted mind of an abused young woman? Typically, the Swedish population lacks a belief in God, though many religions have a following in the country. The book addresses this by having every character in the book seemingly atheist, except for two women, Harriet Vanger and Mikael Blomkvist’s daughter Pernilla. Both of these women are religious, therefore quite familiar with the Bible’s contents. As every other character seems to lack an intimate knowledge of this holy book, these two characters are the key to solving the mysteries of the identities of the serial killers as well as the disappearance of Harriet. During a visit with her father, Pernilla notices the list of names and states that quotes on his wall are “gloomy and neurotic” (317).  Mikael is nonplussed until he finds a Bible to look up the verses. What he finds is staggering. 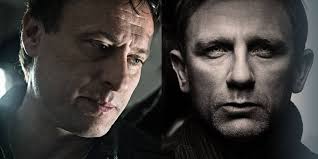 (Michael Nyqvist in the 2009 Swedish film v. Daniel Craig in the 2011 American film: Who does Mikael ‘Kalle’ Blomkvist better?)

The phrase, Magda—32016, translates to 3:20:16, or Leviticus (the third book of the Bible), chapter 20, verse 16 which states: “If a woman approaches any beast and lies with it, you shall kill the woman and the beast; they shall be put to death, their blood is upon them.”

Sara—32109 translates to Leviticus 21:9, or: “And the daughter of any priest, if she profanes herself by playing the harlot, profanes her father; she shall be burned with fire.”

R.J. —30112, in turn, translates to Leviticus 1:12, or: “And he shall cut it into pieces, with its head and its fat, and the priest shall lay them in order upon the wood that is on the fire upon the altar.”

And finally, Mari—32018, is decoded as Leviticus 20:18, or: “If a man lies with a woman having her sickness [period], and uncovers her nakedness, he has made naked her fountain, and she has uncovered the fountain of her blood; both of them shall be cut off from among their people.”

Each of these phrases is connected to a murder that one of the Vanger men committed during Harriet’s teenage years. Lisbeth Salander is the one who tracks down each murder from the surrounding towns closest to the Vanger family residence. Each murder that occurred coincided with a business meeting at which Gottfried or Martin Vanger was present. The killers were never caught because the murders were never connected due to the lack of an obvious pattern, which our two investigators linked with Leviticus.

Lisbeth discovered that each girl was killed exactly in accordance to Leviticus. The first murder was of Rebecka Jacobsson, listed as R.J., in which she was killed by having her head placed on smouldering coals—Leviticus 1:12. Next was Mari Holmberg, a prostitute who was strangled with a sanitary napkin—Leviticus 20:18. Third was Rakel Lundel, listed as R.L., had a hobby of reading tarot cards and palms, which got her stoned as she was tied to her laundry-drying frame—Leviticus 20:27. After Rakel was Magda Lovisa, a farmer’s wife who “approached” animals daily, brutally tortured and killed in a horse stall—Leviticus 20:16. The fifth murder was Sara, the daughter of one pastor and the wife of another, was found strangled and her apartment set ablaze—Leviticus 21:9. The victims on Harriet’s list were the first of many, as Lisbeth discovers three other possible murders from around the same time, with each one dealing with a verse from Leviticus.

Each woman’s name was of Hebrew origin. Rebecka equated Rebecca. Mari is the Swedish spelling for Mary. Rakel, when Anglicized, become Rachel. Sara needs no explanation. Madga is paired with another one of the later cases, Lena, as both names are short for Magdalena, a name taken from Mary Magdalene. Another to mention is Lea, or Leah in the Bible. The final victim was named Liv, meaning to live, which can also be traced to the name Eva, or Eve. These names of Jewish heritage made these women targets to the serial killing pair of Vanger men. Their “crimes” that led to them being victims were obviously warped perceptions of the fanatically tainted biblical knowledge of the killers.

(photograph of Harriet Vanger from the American film adaptation)

Harriet knew her father and brother were murdering women across the country according to their extreme anti-Semitic and violent tendencies. Because she knew this, she was targeted with harsher abuse by her father, Gottfried. In an instance of desperate self-defence, Harriet killed her father and had to flee Sweden to avoid anyone suspecting her involvement with his death. This is why she disappeared so suddenly from the family gathering—she wasn’t missing, she relocated to avoid any criminal implications. The biblical samples of Leviticus within “The Girl with the Dragon Tattoo” are most obviously an allusion because the truth of Harriet’s disappearance would never have been revealed without having the familiarity of the book’s verses.

What’s the big deal about body hair and skin markings?

Reading through Leviticus was slightly tedious. All of these laws, demands, and rules for living under the covenant of God must have weighed heavily upon the Israelites. In Chapter 19, God very explicitly lays out his blueprint for the day-to-day lives of the Israelites. This chapter covers a variety of pragmatic matters from servant wages to keeping two kinds of cattle from breeding with each other. The verses of 27 and 28 caught my eye in particular:

“You shall not round off the hair on your temples or mar the edges of your beard. You shall not make any cuts on your body for the dead or tattoo yourselves: I am the LORD.” (Lev: 27-28)

Let’s start with the beards and the hair. According to certain historians, the time period of Leviticus can be set between 1495 to1455 BCE (Bible World History). Coinciding with this was the Dynastic Period of Egypt, in which body hair was a big deal. The priests of Egypt saw body hair as unclean (History of Shaving), which would be an offense to the gods, so it was entirely shaved off. Even the pharaoh removed parts of hair, regulating his beard shape. The people of Egypt spent a great deal of time and effort policing their body hair (Art of Manliness). Now if I were the Protagonist who wanted to have my people, the Israelites, set apart, wouldn’t I want for them to stop using the cultural norms of another people, especially the people I had just rescued them from? By not marring the beard nor shaping the hair at the temples, the Israelites would be distinguishable from the Egyptians, their former enslavers. In addition, the Israelites’ less rigid depilation schedule freed up time to focus their attentions on all of the other rules of the covenant.

Hebrews = the Duck Dynasty of their generation.

As for tattooing, this again could be tied to the Egyptians. Amunet, a mummified priestess of Hathor, was discovered with extensive tattooing around her lower abdomen and on her arms and legs (Tattoos of the Egyptian World). Hathor, the goddess of fertility and sexuality, is believed to have been honoured by the tattooing of Amunet. Though not widespread, the tattoos of the Egyptians seem to have been a form of ritualistic practice to celebrate the gods (Tattoo Temple). Tattooing was considered a mark of slavery or submission to a deity, so it is obvious that the Israelites were to avoid this form of dedication to a false idol (Jewish Virtual Library). The people of the Protagonist were to be dedicated only to Him and His covenant, not to the gods of a bygone era of their lives.

To continue the idea of marking the body, Leviticus states that the Israelites may not cut their bodies for the dead. The Amorites were a culture who often cut their flesh if a member of their household had died (Torah Insights on the Weekly Parsha). The Amorites, a Semitic tribe, were extremely well known for their military prowess, as they helped contribute to the downfall of the Sumerian empire’s Ur (Egypt Origins). They also worshiped a god other than the Protagonist (Who Were the Amorites). Obviously, the Protagonist isn’t going to allow his chosen people to align themselves with another culture’s religious practices or to seek out human glory over revering Him.

The Protagonist set the rules of the covenant before the Israelites in Leviticus to differentiate them from the surrounding cultures of the area. By following these rules, the Israelites would be holy as their Lord was holy, and then gain the benefits of being in a contract with the Protagonist: as a nation, they are promised a fruitful existence protected from their enemies.