The Blood Covenant of Abram 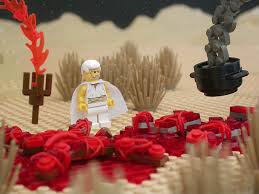 As I sat bewildered at the fact that God demanded Abram cut every mammal in half but the birds, my mind sped to the symbolism of this action. Why cut the heifer, the female goat, and the ram in half but not the turtledove nor the pigeon? Did the action of cutting the animals in half symbolize something? And why choose these animals in particular? What did these animals represent? As I researched these questions and delved further into Genesis, answers rose to the surface.

In Jewish symbolism, the dove was a feminine symbol often associated with fertility and the spirit of God (Biblical Archaeology). I found this gem of information most interesting as the fifteenth chapter of Genesis is all about the covenant between God and Abram to populate the earth with Abram’s offspring. Considering the fact that Sarai, Abram’s wife, was entirely too old to bear children, the dove sacrifice represented God’s ability to make her fertile. To continue with the feminine aspects of this sacrificial ritual, two female animals were also slaughtered, the heifer and a goat. Perhaps these two animals embodied the feminine aspect of this ritual while literarily strengthening the message sent to early biblical readers.

In continuity with the animals, I dug deeper into Genesis, finding another verse that connected Abram’s offspring to this ritual:

“And Abraham lifted up his eyes and looked, and behold, behind him was a ram, caught in the thicket by his horns. And Abraham went and took the ram and offered it up as a burnt offering instead of his son.” (Gen 22:13)

So if the ram represented Abraham’s son later in Genesis, then in my opinion, the ram in chapter fifteen foreshadows this later sacrifice to God. The ram in chapter fifteen was another symbol of Abram’s offspring, later to be born as Isaac. So I had the answers to part of my line of questioning; the animals themselves represented both the fertility of Abram’s wife and the promise of offspring. These animals were chosen to be the representatives of the promises that God was making to Abram.

Finally, I came to rest at the halving of the animals. In the process of research, I discovered that blood covenants were fairly common in the time period of Abraham. I also found that the verb for “making” a covenant is KRT or to cut (Cutting Covenants and Cutting Animals). Later, the symbol of the covenant wouldn’t be halved animals, it would become circumcision. Literally, God cut a covenant with Abram. The cutting of the animals was simply the commonplace practice of signing a contract. This was culturally relevant to Abram, as he would have understood the significance of the blood promise made between himself and God.

“Let’s cut a covenant, shall we?” – Knife Wielding Rabbi

Abram’s covenant with God was a business deal as he would deal with any other person who was making promises to him, solidified by the blood ritual and the symbolism of each animal.